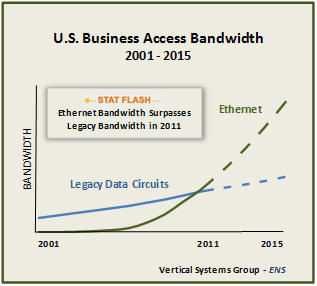 BOSTON, MA, JULY 26, 2011 —
Driven by escalating demand for higher speed network services, the volume of Ethernet bandwidth purchased by enterprises in the U.S. has surpassed the aggregate bandwidth for legacy circuits, according to new research from Vertical Systems Group.  2011 marks the tipping point of a surge in the installation of Ethernet connections with access rates ranging up to 10+ Gbps. Looking ahead to 2015, Ethernet bandwidth is projected to more than double based on Vertical’s latest analysis of enterprise requirements.

“Boosted by a 10x surge in the past five years, Ethernet bandwidth has overtaken legacy bandwidth in the U.S. market,” said Erin Dunne, director of research services at Vertical Systems Group. “This milestone fittingly coincides with the ten year anniversary of the MEF – an organization that has successfully fostered the deployment of carrier-class Ethernet services throughout the world.”

Vertical Systems Group is recognized worldwide as a leading market research and strategic consulting firm specializing in defensible quantification of the networking industry. For more information see www.verticalsystems.com and follow us on Twitter. To speak to an analyst at Vertical Systems Group, please contact us.