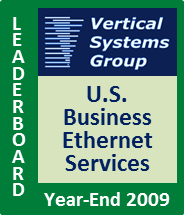 Posted at 12:30h in Leaderboards by edunne

BOSTON, MA, JANUARY 29, 2010 —
The U.S. competitive environment for Business Ethernet services is heating up in response to expanding market demand, according to Vertical Systems Group’s latest research on enterprise 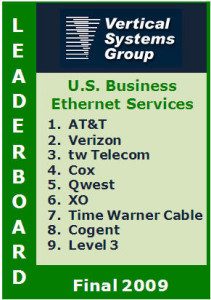 “Business Ethernet is not a mass market offering in the U.S. yet.  However, in 2009 we watched Ethernet emerge as the most significant strategic product in service providers’ data portfolios. With upward demand from enterprise customers for higher access speeds, service providers are being challenged to increase network capacity and decrease installation cycle times,” said Rick Malone, Principal at Vertical Systems Group. “AT&T heads our Leaderboard for the second year in a row by increasing its Business Ethernet base more rapidly than the overall market.”