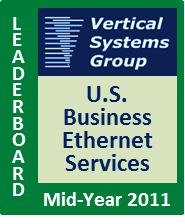 Posted at 04:53h in Leaderboards by edunne

Competition heats up as demand for Ethernet services remains strong in the first half of the year.

“Competition heated up in the U.S. market during the first half of 2011, with very strong enterprise demand that is tracking the 30+% port growth we quantified for 2010,” said Rick Malone, principal at Vertical Systems Group. “Also as expected, service provider consolidation is having a measurable impact on the market. CenturyLink made its Leaderboard debut in fourth position as a result of its merger with Qwest. Among the pending Ethernet-related transactions we’re watching for the second half of the year are Level 3’s acquisition of Global Crossing, and Windstream’s acquisition of Paetec.”