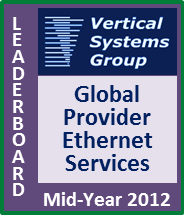 Posted at 15:25h in Leaderboards by edunne

Providers actively expanding their global Ethernet service infrastructures retain share as competition tightened in the first half of 2012. 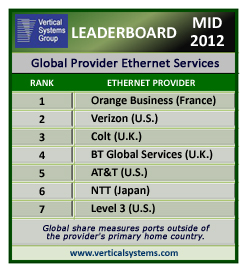 “Leaderboard competition tightened up in the first half of 2012. The share differential between a number of Global Providers is less than 1%, indicating that shifts in the Leaderboard rankings are likely by the end of the year,” said Rick Malone, principal at Vertical Systems Group. “Global Providers that actively expanded their Ethernet service reach into Latin America, southern Asia and the Middle East were least impacted by the slowdown in Europe, and therefore fared better at retaining market share.”

All other Global Providers offering Ethernet services outside of their home countries have port shares that are below the Leaderboard threshold. These companies are segmented by share into two tiers: the “Challenge” tier and the “Market Player” tier.

The Challenge tier expanded to five companies (in alphabetical order) with the addition of Cable & Wireless (U.K.) and Cogent (U.S.) to the previous roster of Reliance Globalcom (India), Tata Communications (India) and T-Systems (Germany).