Posted at 18:15h in Leaderboards by edunne 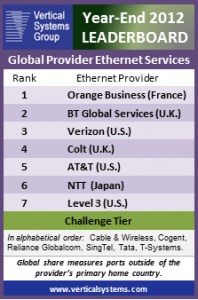 “As we forecasted in our mid-year readout, the final 2012 Global Provider Ethernet market share results show a realignment at the top of the Leaderboard,” said Rick Malone, principal at Vertical Systems Group. “Orange remains the market leader, however BT Global Services gained significant share to move up to second position ahead of Verizon and Colt. The outlook throughout 2013 is heightened competition for market share in this demanding customer segment.”