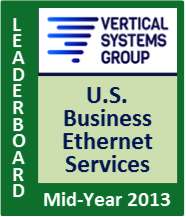 Posted at 15:02h in Leaderboards by edunne 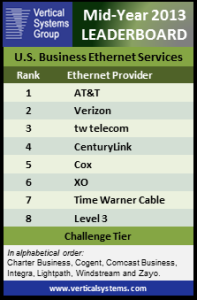 CenturyLink, Cox, XO, Time Warner Cable, and Level 3. Port shares for mid-2013 were calculated using Vertical’s base of enterprise installations, plus direct input and other data from surveys of Ethernet Service Providers. To qualify for the Leaderboard, a provider must have four percent (4%) or more of billable retail port installations.

The following seven Ethernet providers have the next highest mid-2013 port shares and have achieved a position in the Challenge tier (in alphabetical order): Charter Business, Cogent, Comcast Business, Integra, Lightpath (formerly Optimum Lightpath), Windstream, and Zayo Group (includes AboveNet and other acquisitions). To qualify for the Challenge tier, a provider must have 1% or more of billable retail port installations.