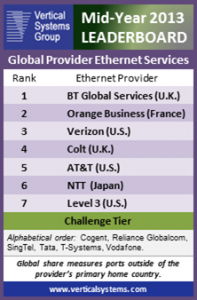 “Our research analysis for this cycle clearly shows that the migration of legacy access to Ethernet is in full swing across all regional markets throughout the world,” said Rick Malone, principal at Vertical Systems Group. “Ethernet access for multinational IP VPNs was the top revenue driver cited by providers. BT has taken advantage of this opportunity within its extensive base of global VPNs to attain the top position on our Global Provider Leaderboard.”