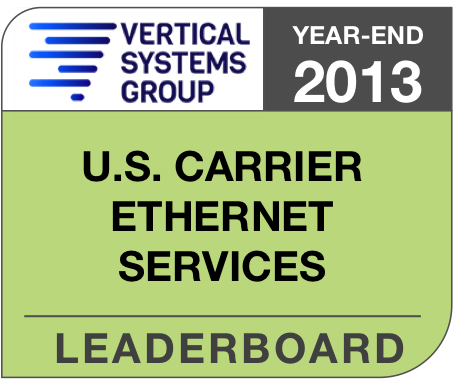 Posted at 12:15h in Leaderboards by edunne 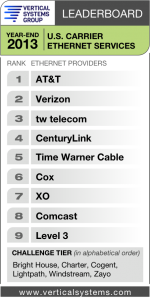 The fastest growing application for 2013 continues to be Ethernet access to IP/MPLS VPNs, a capability supported by each of the Incumbent Carrier and Competitive Provider companies ranked on the LEADERBOARD. For Gigabit speed Ethernet services, the top applications were connectivity to Data Centers and Cloud services.

A key business concern cited by Ethernet providers is disruptive service pricing in major U.S. metro markets. Competition for new business intensified during the past year as regional Ethernet providers and Cable MSOs focused on share gain. This trend is expected to continue throughout 2014.

Cable MSOs gained ground on the 2013 U.S. LEADERBOARD. Time Warner Cable moved up just ahead of Cox to gain the top Cable MSO provider position. Comcast moved up from the Challenge Tier, and was the fastest growing of all ranked companies.

Other providers selling Ethernet services in the U.S. are segmented into two tiers as measured by port share. The first or Challenge Tier includes providers with between 1% and 4% share of the U.S. retail Ethernet market. For 2013, the following six companies attained a position in the Challenge tier (in alphabetical order): Bright House Networks, Charter, Cogent, Lightpath (formerly Optimum Lightpath), Windstream and Zayo.