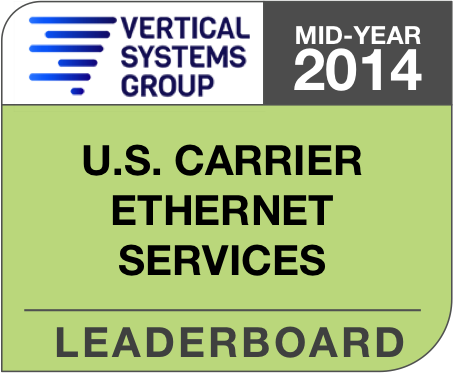 Posted at 00:06h in Leaderboards by edunne 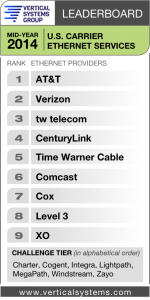 The next, or Challenge Tier, includes all providers with between 1% and 4% share of the U.S. retail Ethernet market. The following seven companies attained a position in the mid-2014 Challenge Tier (in alphabetical order): Charter, Cogent, Integra, Lightpath, MegaPath, Windstream and Zayo.

“Now beyond the hockey stick ramp stage, the U.S. Ethernet services market has entered a very healthy growth period. During the first half of 2014, more new Ethernet customer ports were installed than during any previous corresponding period,” said Rick Malone, principal at Vertical Systems Group. “Customers shopping for Ethernet services have a broader choice of companies with substantial Ethernet assets, including the sixteen providers on the mid-2014 LEADERBOARD and Challenge Tier rosters.”

A shakeup of the U.S. LEADERBOARD may be ahead, pending the outcome of merger activity for four of the top nine providers. In February, Comcast announced its intent to acquire Time Warner Cable. In June, Level 3 announced an agreement to acquire tw telecom.