Posted at 10:24h in Leaderboards by edunne

Port growth unprecedented in the first half of 2015; Mergers may shake up the market by the end of the year 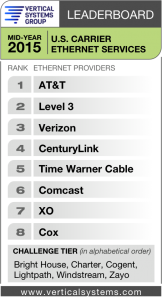 “U.S. Ethernet port growth was unprecedented in the first half of 2015 and easily surpassed previous estimates. This market seems to be defying the law of large numbers, as there are few indications of the typical slowing growth patterns that we look for when services reach this size and maturity,” said Rick Malone, principal at Vertical Systems Group. “Primary drivers for growth are massive migration from TDM to Ethernet services, robust demand for higher speed Ethernet private lines and rising requirements for connectivity to public and private Clouds.”

Other providers selling Ethernet services in the U.S. are segmented into tiers as measured by port share. The Challenge Tier includes providers with between 1% and 4% share of the U.S. retail Ethernet market. The following six companies attained a position in the mid-2015 Challenge Tier (in alphabetical order): Bright House, Charter, Cogent, Lightpath, Windstream and Zayo.

Pending mergers could shake up the Ethernet marketplace by the end of 2015. In April 2015, Comcast ended its bid to acquire Time Warner Cable in the face of strong consumer opposition and regulatory hurdles. In May, Charter announced a merger that includes both Time Warner Cable and Bright House. Currently pending regulatory approval, this deal has the potential to change the U.S. Ethernet competitive landscape as significantly as Level 3’s acquisition of tw telecom in 2014. Both Charter and Bright House are Challenge Tier companies. Time Warner Cable is ranked fifth on the Mid-2015 U.S. Carrier Ethernet LEADERBOARD.