Posted at 08:42h in Leaderboards by edunne 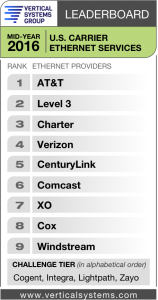 providers. The LEADERBOARD threshold is four percent (4%) or more of billable port installations.

Charter joins the LEADERBOARD for the first time at third position based on aggregated ports from its May 2016 acquisitions of Time Warner Cable and Bright
House. At the end of 2015, Time Warner Cable was the top Cable MSO and ranked fifth on the U.S. LEADERBOARD, while Charter and Bright House were in the
Challenge Tier. Charter Spectrum is now the largest Cable MSO provider of retail Ethernet services.

As a result of this LEADERBOARD shakeup, Verizon’s mid-2016 rank drops to fourth from third in 2015 and CenturyLink moves from fourth to fifth. Additionally, XO moves into the seventh share position ahead of Cox, which dips to eighth. In the Challenge Tier, Integra is a new entrant rising from the Market Player tier.

“The competitive balance of the Ethernet marketplace is evident, as more than 60 percent of new connections were delivered by CLECs and Cable MSOs during the first half of 2016,” said Rick Malone, Principal of Vertical Systems Group. “Our analysis shows a 17% annualized growth rate for U.S. Carrier Ethernet services for the full year.”

The Challenge Tier includes providers with between 1% and 4% share of the U.S. retail Ethernet market. The following four companies attained a position in the mid-2016 Challenge Tier (in alphabetical order): Cogent, Integra, Lightpath (an Altice USA brand) and Zayo.