Posted at 09:31h in Leaderboards by edunne 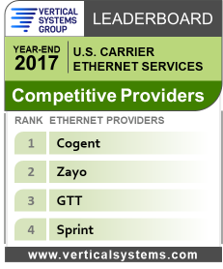 Cogent advances to first position on the 2017 U.S. Competitive Provider Ethernet LEADERBOARD, moving up due to the exits of Level 3 (merger with CenturyLink) and XO (acquired by Verizon), which respectively held the first and second positions in 2016. Also as a result, Zayo moves up to second from fourth position, and Sprint moves up to fourth from fifth position. GTT solidly attains third position for its initial entry to the Competitive Provider benchmark ranking.

Each of these top four competitive providers has a Challenge Tier citation on the 2017 U.S. Carrier Ethernet LEADERBOARD. (For the first time, no Competitive Providers qualified for a LEADERBOARD rank.) Hundreds of CLECs, local and regional providers, global and specialized carriers that operate fiber-based networks or utilize third-party network facilities compete in the U.S. Ethernet services market.