Posted at 15:42h in Leaderboards by edunne 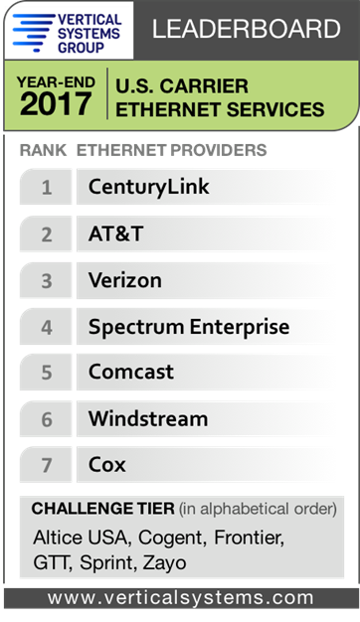 BOSTON, MA, FEBRUARY 22, 2018 – Vertical Systems Group today announced that CenturyLink has captured the #1 spot on its latest LEADERBOARD of U.S. Ethernet market leaders. It is the first time a provider other than AT&T has led the benchmark ranking since 2005.

CenturyLink’s advance was driven by its November merger with Level 3, along with continued growth in Ethernet ports for both companies. Previously, Level 3 ranked second to AT&T and CenturyLink ranked fifth on the Mid-2017 U.S. Ethernet LEADERBOARD.

To qualify for the LEADERBOARD, network providers must have four percent (4%) or more of the U.S. Ethernet services market. Shares are measured by the number of billable retail customer ports in service as tracked by Vertical Systems Group.

“In addition to the shakeup at the top of the LEADERBOARD, U.S. Ethernet installations exceeded the milestone of one million ports in 2017,” said Rick Malone, principal of Vertical Systems Group. “Overall, the fastest growing Ethernet deployments were driven by higher speed cloud connectivity and IP VPN access. Service providers cite price compression as a continuing challenge, as well as delayed network purchase decisions due to SD-WAN evaluations.”

In addition to the roster of LEADERBOARD providers, all other companies selling Ethernet services in the U.S. are segmented into two tiers as measured by port share. The first or Challenge Tier includes providers with between 1% and 4% share of the U.S. retail Ethernet market. For year-end 2017, the following six companies attained a position in the Challenge Tier (in alphabetical order): Altice USA, Cogent, Frontier, GTT, Sprint and Zayo.