Posted at 09:50h in Leaderboards by Rosemary Cochran 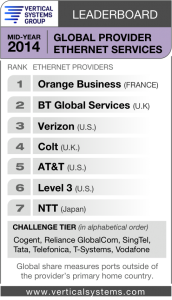 “The integration of Ethernet into MPLS network infrastructures is generating revenue opportunities for global carriers, driven by customer demand for higher bandwidth connectivity,” said Rick Malone, principal at Vertical Systems Group. “More than half of new global IP VPN connections are being delivered over Ethernet.”

Based on mid-2014 port share results, there were no new entrants into the Global Provider LEADERBOARD. Orange Business retains the number one position, with BT Global ranking a close second. Level 3 had the largest share gain in the first half of the year, which boosts its rank from seventh to sixth position, ahead of NTT. AT&T gained share to retain fifth position, edging out Level 3 by a narrow margin.