Posted at 09:33h in Leaderboards by edunne 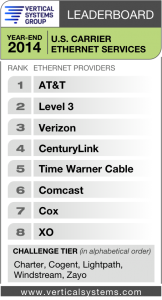 Port shares were calculated using the base of enterprise installations of Ethernet services, plus input from surveys of Ethernet providers. The LEADERBOARD threshold is four percent (4%) or more of billable port installations.

Another competitive differentiator for Ethernet providers is MEF CE 2.0 service certification. Six of the eight companies on the 2014 U.S. LEADERBOARD are CE 2.0 certified, and the other two have CE 1.0 certification.

“Level 3’s acquisition of tw telecom jumps it into second place on the LEADERBOARD. The combined entity finishes the year behind market leader AT&T and ahead of Verizon, which drops to third,” said Rick Malone, principal at Vertical Systems Group. “The Carrier Ethernet marketplace is actively consolidating as providers seek to augment their footprints, expand their portfolios, and enhance shareholder value. We anticipate additional major changes in 2015, some already announced, with others in process.”

Other providers selling Ethernet services in the U.S. are segmented into two tiers as measured by port share. The first or Challenge Tier includes providers with between 1% and 4% share of the U.S. retail Ethernet market. For 2014, the following five companies attained a position in the Challenge tier (in alphabetical order): Charter, Cogent, Lightpath, Windstream and Zayo.