Posted at 17:46h in Leaderboards by edunne

LEADERBOARD expands to nine; Ports grew more than 20 percent in 2015

To qualify for the LEADERBOARD, providers must have four percent (4%) or more of the U.S. Ethernet services market. Shares are measured by number of ports in 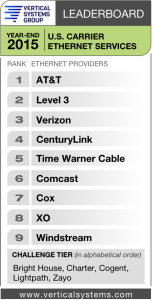 service at businesses and enterprises as tracked by Vertical, with input from surveys of Ethernet providers.

“For the full year 2015, the Ethernet market grew by more than 20 percent, however the second half of the year showed moderating growth going into 2016,” said Rick Malone, principal at Vertical Systems Group. “During this cycle, Windstream moved up to the LEADERBOARD from the Challenge Tier based on the strength of its Ethernet private line service and its presence in many smaller markets that others do not serve.”

Other providers selling Ethernet services in the U.S. are segmented into two tiers as measured by port share. The first or Challenge Tier includes providers with between 1% and 4% share of the U.S. retail Ethernet market. For 2015, the following five companies attained a position in the Challenge tier (in alphabetical order): Bright House, Charter, Cogent, Lightpath and Zayo.