Posted at 17:10h in Leaderboards by edunne

Colt, AT&T and Level 3 gain share for the year; Colt advances into second position ahead of BT Global 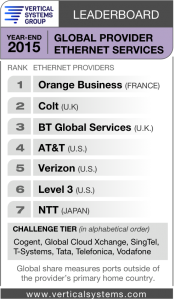 higher share of billable retail ports at sites outside of their respective home countries.

Colt advances to second position on the 2015 Global Provider LEADERBOARD ahead of BT Global based on continued share gain in the second half of the year. AT&T and Level 3 were the only other LEADERBOARD-ranked companies to gain share in this segment during 2015.