Posted at 08:20h in Leaderboards by edunne 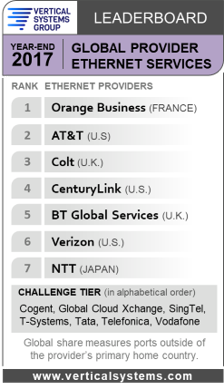 Orange retains the top position on the Global Provider Ethernet LEADERBOARD based on year-end 2017 port share results. AT&T advances to second position, displacing Colt, which moves to third position. CenturyLink is a new entrant, attaining fourth position based on ports acquired from its Level 3 merger. At mid-year 2017, Level 3 ranked fourth on the Global Provider LEADERBOARD and CenturyLink was in the Market Player tier.

MEF certification is recognized as a market differentiator for Ethernet providers and a foundation of the MEF 3.0 framework for advanced services. Global Ethernet Provider companies that have received MEF CE 2.0 certification as of March 2018 are as follows: