Posted at 16:45h in Leaderboards by edunne 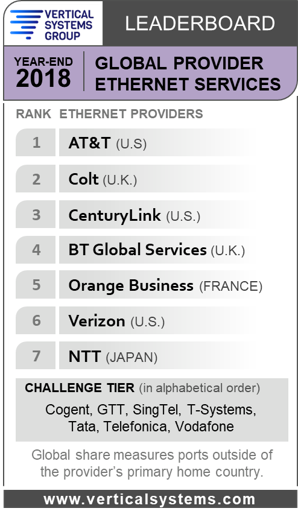 The industry benchmark for multinational Ethernet network market presence, the Global Provider LEADERBOARD ranks companies that hold a 4% or higher share of billable retail ports at sites outside of their respective home countries.

Share margins continue to narrow among the leading global service providers in this very competitive market segment. Latest share results show a major shakeup in the rankings for the top five companies as compared to year-end 2017, with each in a new position on the 2018 Global Provider LEADERBOARD.

MEF certification is recognized as a market differentiator for Ethernet providers and a foundation of the MEF 3.0 framework for advanced services. Global Ethernet Provider companies that have received MEF CE 2.0 certification as of March 2019 are as follows: